Step into the robe of Kevin, the exceptionally handsome but woefully inattentive wizardry student, whose gorgeous face has just been stolen. Follow the thief through the dangerous dungeons beneath the academy, encounter mythical monsters, and learn powerful magic along the way!

The Wizard is a quirky, turn-based dungeon puzzler with a unique spell casting system, lovely 16bit-look and high-quality soundtrack. Can you make it through the monster-filled mazes to catch the mysterious thief?

If you enjoy The Wizard and would like to support us, we're offering the original soundtrack for donations of $6 or more.

The Wizard is coming to Steam! Check out the announcement trailer and wishlist now!

The Wizard: Original Soundtrack 54 MB
if you pay $6 USD or more

Very well done! I really liked it: the art, music, sounds, and the game mechanics. It could be difficult at times, but just enough that it made me want to figure the enemies and spells out. Funny story too! And nice reference, to which I say, "What manner of man are you that can summon up fire without flint or tinder?" :D

i clicked "restart level" and it restarted the whole f'ing game! :O

oh fck it! might as well buy the game now.

Not the incentive we intended to set, but still appreciated ;)

Oh no, that shouldn't have happened!

now I am definitely stucm at 4-3 (or was it?)
I literally make it through the rooms mostly healthy but the 2 soldiers and the spider wizard fuck me up too bad :-/

Like I can have the others dead and the spider wizard on half health but then the cnt jsut summon another spider which for f'ing obvious reasons also directly has its turn and kills me :-/

no matter how often I try this level, I am always one or two hearts short :-(

Maybe take a look at Anistuffs' playthrough to see if you can do anything differently. But it certainly is a tough level, especially if you missed the hidden blood magic spells ;)

I got 2 so far but obviously did not upgrade the OP one of them :-(

Yep, I probably screwed up with the skill choices there :-/

watching his video, his inital strategy isnt too different from mine.
I've come to wonder though: how does he make the wizard sleep?
like the game doesnt continue if you dont do a move or do an attack?
and dragging a move tile towards you only does cancel

one thing Anistuff could have optmized in general:
instead of spamming fireball or fire wall to deal 1 damage per turn, he could actually use fire ball/wall only when necessary to make people burn again and use shock instead at close range.
like, if the enemy is burning and you use shock, you make 1,5 hearts damage isntead of the 1 heart when using fire on an already burning enemy :-)

you know, the first level with tons of ladders.
the barrage from eft and right makes this a bit hard.
sure can damage boost past them but I want to kill all the enemies :-)

Uh, I accidentally clicked through the ending, and now I have to do the game over again to read it... lol

Very fun game, though! I enjoyed the careful planning that had to be done with each move, and the assortment of different spells. I will say that although fun, Level 3 Invisibility might be a bit too powerful, given that the HP cost becomes increasingly negligible - I defeated the final boss (lobster-demon) by keeping invis constantly up and fireballing them repeatedly.

All in all, an enjoyable use of my time- looking forward to the Steam edition!

Edit: Perhaps it could be made so that you can page back instead of just forward? I accidentally skipped a page and then skipped all the rest trying to click on the previous page to go back.

Glad to hear! Well, except that you missed the ending of course. Sorry about that! But thanks for the feedback. We've already implemented a way to go back a page in the story book in the Early Access version that's currently on Steam and we're looking at the Demon encounter at the end as well. He might get the ability to cancel your blood spells...

If you're interested in following the development you can join us on our Discord ;)

I got invisibility and then died to a freaking skeleton

And had to start all over

When the game ends, and you say to yourself "oh no, I had wanted some more levels", you realize you have had a good time in front of the computer.

That's really awesome to hear :) and worry not, more is coming! https://store.steampowered.com/app/1275600/The_Wizard_WizHarder_Edition/

Also, on the third turn the enemy is able to move again after it ends. If it is a full turn, then the enemy should move the ability to do an action back to me.

Yeah that can be a bit confusing at first. They are frozen for three enemy turns, the first one being right after you cast the ice spell. So for the first frozen turn, it doesn't move at all, and then two more turns where it only has limited movement. After that it's back to normal, but you can refreeze at any time to bring the count back up (careful with fire though, that'll thaw it right away ;) )

This is a very well designed game but more of a puzzle game than a rogue-like. The movement and spell-casting mechanics are great. There's a nice 16-bit aesthetic and the music fits well.

Reply
4re2 years ago

this is a pretty cool game, i can't get past the 3rd lvl (spiders) does anybody have any tips?

I can't really offer you much advice other than replay it until  you get it right, and be weary of the spiders sensing range,  which is around 3-4 tiles,  make sure to get noticed from a spot that takes a couple turns to get to.

Using the (if possible upgraded) freeze spell allows you to decrease their high movement speed so you can decimate them using magic missile and shock.

Reply
4re2 years ago

thank you so much!

The game seems nice, but is EXTREMELY stringent about how you should progress through a level in the early part of the game when you have little health, I had to restart the room after the spiders over and over because I'd misstep once, and I'd end up with a spider right next to me, where freezing would do nothing. It blocks one point of damage from that position, but with 6 health the effect stacks up over time fast.

I don't mean to be mean, I think the music and art is great,  the game is fun to play even if it's annoying to misstep once and have to restart the level. If the art is part of a tileset, I'd like to know where it's from.

But playing the game is tedious and borders on being unfun due to how specific the way to  complete each level is. I blame this mostly on being given such weak spells that have to be used perfectly, or else they don't do enough damage to an enemy to save yourself from dying.

I get your criticism, but I don't think the spells are at fault. It's not fun to replay the level each time you misstep. Unfortunately retrofitting checkpoints or an undo feature was too much work at the end. I recommend either playing the game on a lower difficulty or really thinking through every step like you would in a game of chess.

Oh and the sprites are by Oryx: https://www.oryxdesignlab.com/

That's a cool project, no doubt! But there's just something special about Oryx sprites (at least his 16bit and lo-fi stuff). I can't put it in words, but every time I look at his sprite sheets I get so inspired to make games with them!

If I may add my 2 cents: I don't actually disagree with you there. The first few levels still give you a bit of slack so you can familiarize yourself with the way it controls, but around the spiders and especially the graveyard level, the gloves come off, so to speak.

The game is very focused on strategy, and a particular approach to it at that, so after the first stage, using that strategy is mandatory to advance. I know that comparison is all sorts of tired, but it's a little like Dark Souls in that sense, there's a particular way you have to play or you will die. That includes a lot of trial and error until it finally clicks, which some people get a huge kick out of and some are left frustrated by.

Here's the good news though: Once it does click, you'll have a much easier time. You'll get more spells and upgrades, which opens up the options on how you can complete a level, and by the end, you'll probably breeze through, not because it got any easier, but because you mastered its way of thinking.

Me, I love it. I mean, I should, I'm one of the developers, but I wasn't at all involved with the design, so I had to figure out what the heck Hackenstein was doing there myself. I do get a massive kick out of that though, but then, I also debug for fun, so what do I know :D

Very good music. Good bitmap graphics. The drawing of the spell is a nice idea, but after a while you ask yourself "Why do I have to do this every time" ? 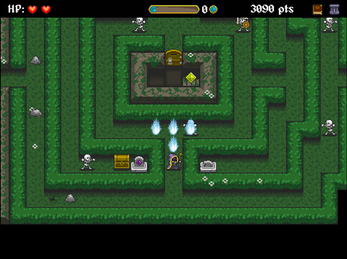 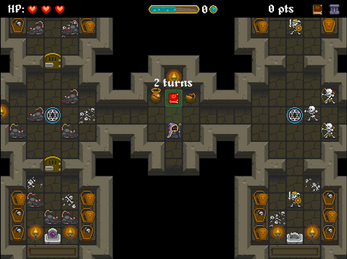 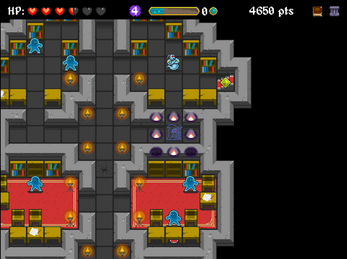 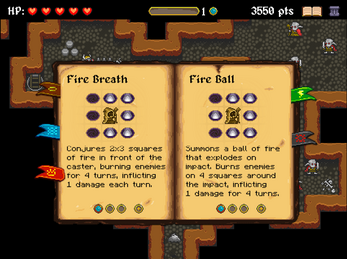 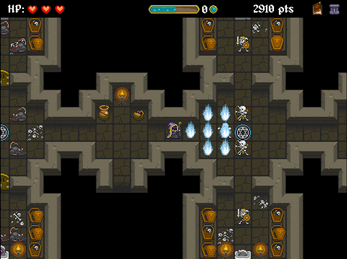 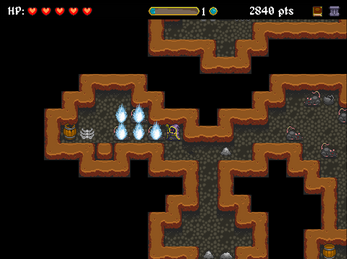 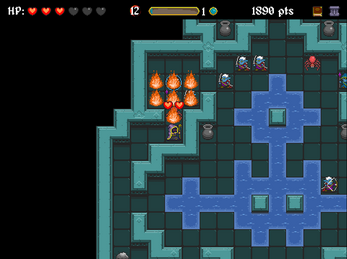 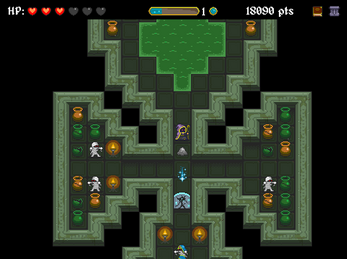